Congratulations on being admitted to Kwame Nkrumah University of Science and Technology (KNUST).

GhNewsbanQ presents to you what you need to know about the KNUST Halls of Residence as you are ready to book accommodations at the university. Apparently most of you have not been to the KNUST campus before but have heard of the names of the residence halls at the university.

As a result, we are here to dissect and bisect the conundrum level and the alacrity of the various halls of residence in KNUST campus (in Kwadwo Sheldon’s voice). Haha, that was just by the way.

Let’s delve into the six halls of residence at KNUST: the year each was established, the facilities available, and the landscape.

What You Need to Know About The KNUST Halls of Residence 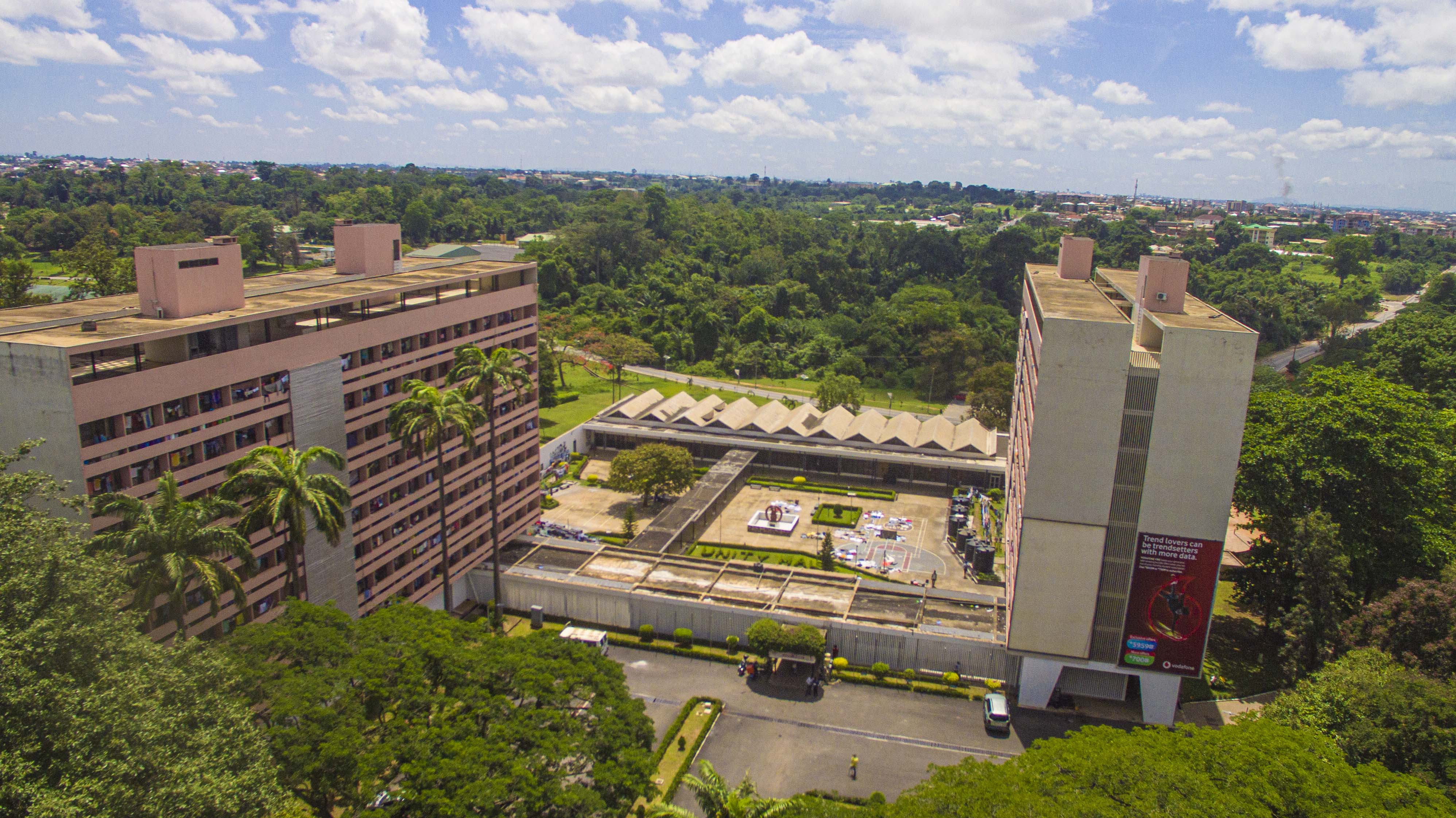 Unity Hall(Conti) is the tallest twin hall in West Africa.

It is the largest hall, with an original accommodation capacity of 448 rooms and 36 additional flats in KNUST. Unity Hall had previously been a male-only hall, but on August 1, 2018, it became a mixed hall. It is known as “The Twin Towers” because of its contemporary facilities. Members of the hall are referred to as continentals.

A modern internet cafe, a communication and business centre, a basketball court, a games room, a boutique and gift store, a barbering salon, a food-serving Canteen, and a shopping centre with well-stocked groceries are among the amenities. It features the biggest, most comfortable, and most welcoming junior common room on campus. 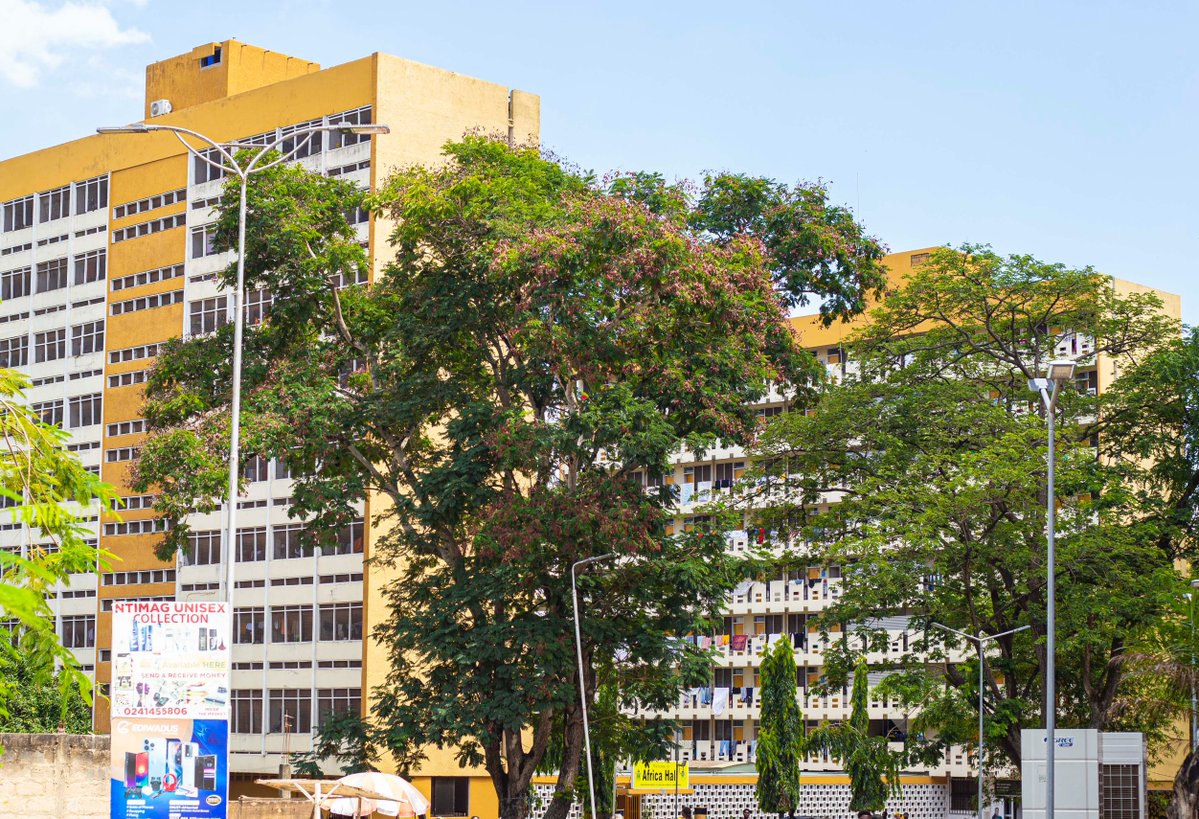 Africa Hall was the only all-women hall on KNUST campus to which majority of its senior female members were assigned as Fellows.

It was then changed to a mixed hall after 2018.  It was first used by students on October 14, 1967. “Domites” is the term used to refer to members of the Hall. There are 192 livable rooms in Africa Hall.

A modern Internet café, a mini-basketball court, a games room, a chapel, a hairdresser, a laundry, a well-run kitchen that serves food, a contemporary mini-market, etc. are available as amenities. All product categories are stocked at the Africa Hall, J.C.R. It is among the greatest on campus, if not the best.

See also  How To Register for KNUST Resit or Supplementary Exams 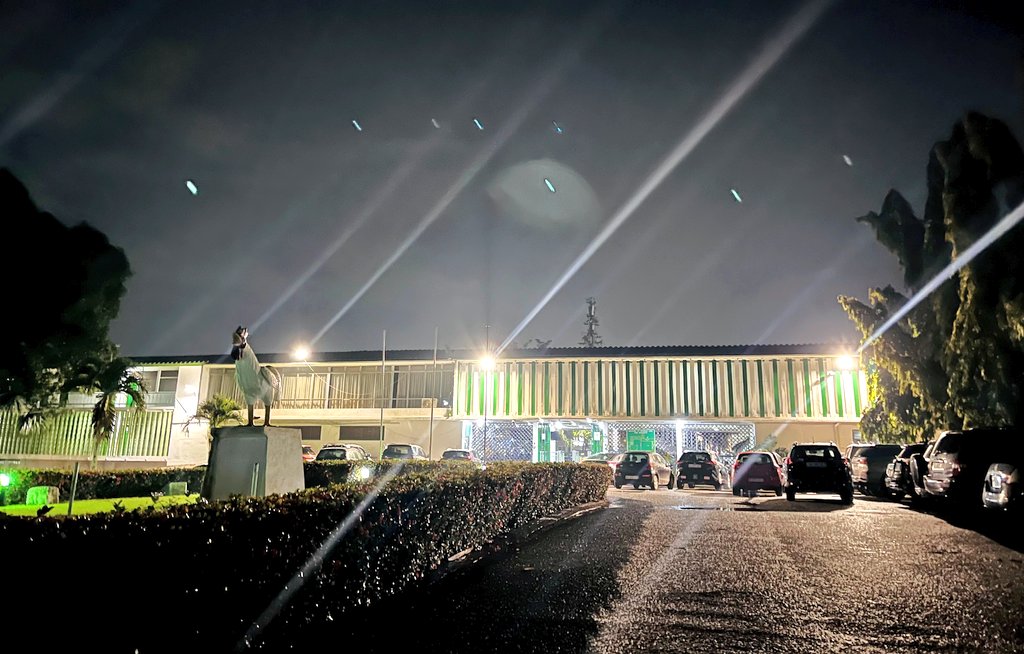 Republic Hall is a mixed-use hall with a capacity of 850 students. The Republic Hall at KNUST was dedicated to commemorating Ghana’s attainment of Republic status in 1960. The hall opened in 1961, but no women were admitted. The first woman to be admitted was in 1991. The main building has 198 rooms, and the annex block has 96.

Facilities include a modern mini-basketball court, a games room, a chapel, a salon, a gift shop, a kitchen that serves food, etc. Cock Tarven is a very popular junior common room on campus. Everyone gathers to socialize. Repu, as it is generally known, also houses the Student Representative Council (SRC) Office. 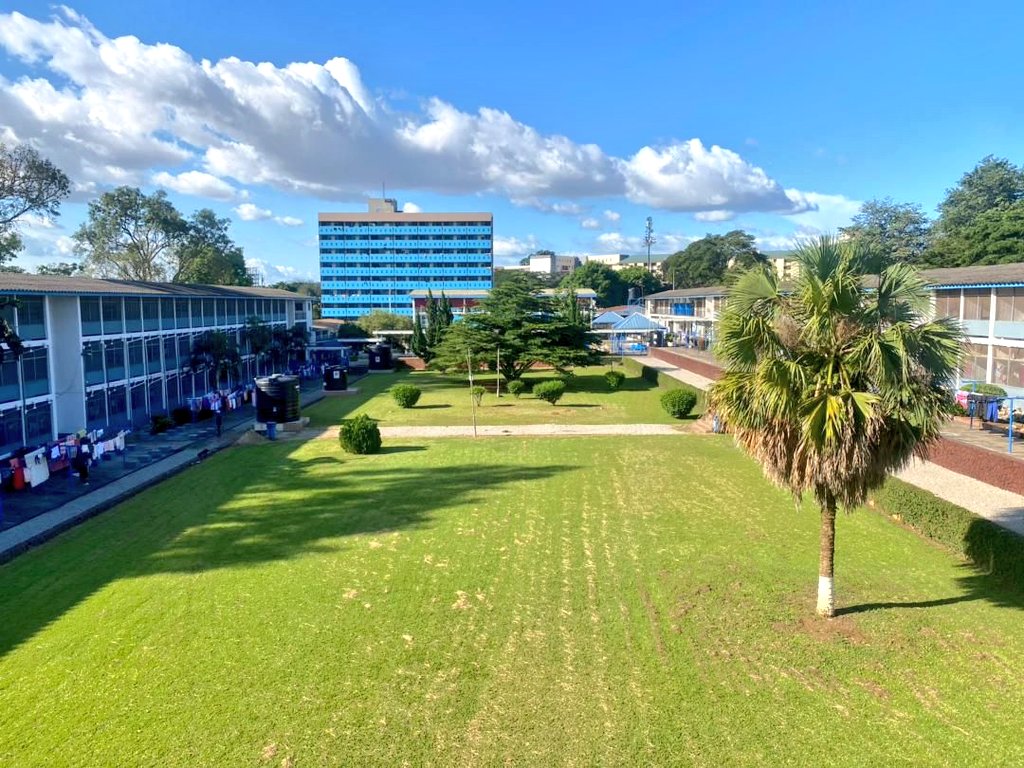 Queen Elizabeth II Hall, often known as Queens Hall, is a 294-room residence hall located in the heart of the KNUST campus. The hall was named after Queen Elizabeth II of England. The Duke of Edinburgh officially commissioned the hall in November 1959.
The Queen of England did not visit the hall until 1961, during her state visit to Ghana.

Members of Queen Elizabeth II Hall are commonly referred to as “royals.” A modern internet cafe, a communication centre, a badminton court, a games room, a gym, a chapel, a salon, a gift store, a shopping centre, a canteen that serves food, and other amenities are available. 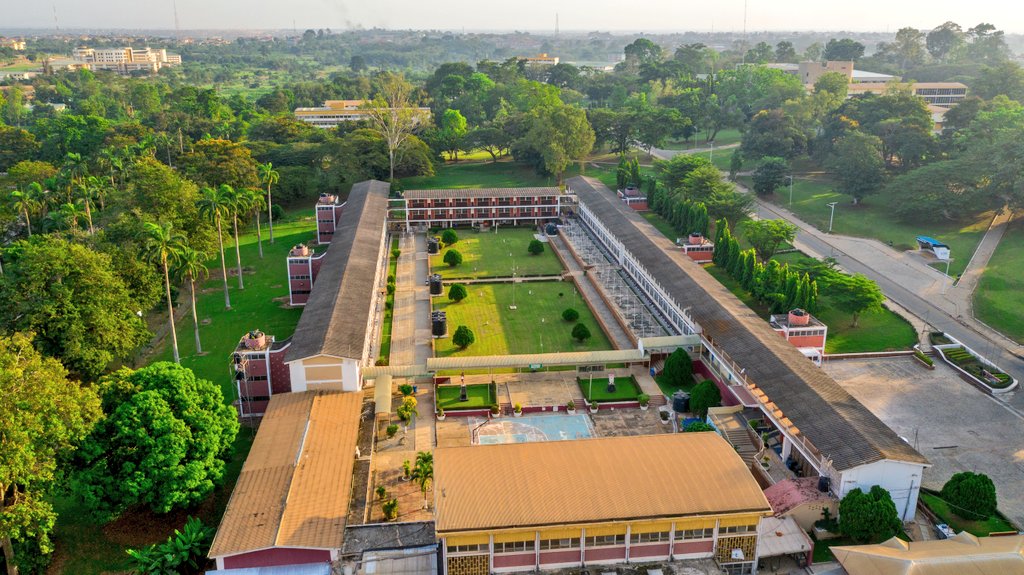 Independence Hall was the first Hall built on the KNUST Campus. The hall was officially opened in February 1959 to commemorate the attainment of Ghana’s independence.

Indece, as it is popularly known, serves as a permanent hall of residence for both male and female students.

The proud residents of the hall are referred to as Spartans. The hall has 96 rooms in an eight-story annex and 198 rooms in the main hall. An internet café, communication centre, gaming area, gym, chapel, salon, mini-mart, and dining hall are all present and correct in the Independence Hall. 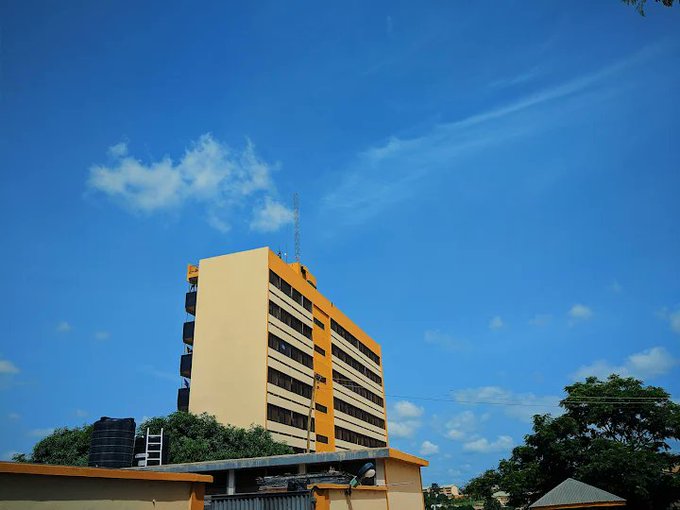 In 1961, the university hall was established. The purpose of the hall was to mark the day, August 22, 1961, when Kumasi College of Technology became a full university. Prior to being changed to a mixed hall on August 1st, 2018, University Hall, also known as Katanga, was an all-male hall. Without including the flats, the main hall contains 198 rooms and can house up to 792 students. There are 95 rooms in the annex, with space for 380 people.

Read also: How The KNUST University Hall Came By The Name KATANGA

A gaming area, a gym, a church, an internet cafe, a mini market, a communication centre, a barbershop, a kitchen that provides food, etc. are just a few of the amenities.
The Junior Common Room in Katanga is extremely active.

Now that you know all six halls of residence and the facilities in each, you can proceed to book your accommodations >>>> How to Book Accommodation in a KNUST Hall

KNUST Hostels Booking: Guidelines To Book A Hostel in KNUST

How To Fill and Deliver KNUST Admission Acceptance Letter

How much is a hall in KNUST?

KNUST halls have four people to a room. Each person is supposed to pay GHC 2167.80 for a bed space. The breakdown of 2022/2023 KNUST hall fees can be found in the table below.

What is the best hall in KNUST?

Republic Hall is one of the most tranquil and stunning halls on the campus of KNUST, if not the most stunning. It is regarded as the hall with the finest hall week among institutions in Ghana and beyond.

What is the oldest hall in KNUST?

Independence Hall is KNUST’s premier and first hall. It also serves as a long-term residence for students of both sexes (both male and female students).

What is the biggest hall in KNUST?

Unity Hall (Conti) is the biggest hall in KNUST, with an original accommodation capacity of 448 rooms and 36 additional flats.

Now that you know all the halls of residence in KNUST and the facilities in each hall, the ball is in your court; you can now choose a hall and book a room for yourself.

We write articles like this because of you. Please help us out by sharing this article with your friends.

Get daily Job and Scholarship updates on Whatsapp, Join Our WhatsApp Group via the link above.

NOTE: PLEASE IF YOU’RE ON ANY OF OUR WHATSAPP GROUPS, DON’T JOIN THIS ONE

How to Ask Your Boyfriend For Money – 6 Effective Ways

How to Get a Man to Give You Money Without Asking, 2023

GhNewsBanQ - February 7, 2023 0
There are amazing job vacancies at Amalitech. The company is a social enterprise that builds the future of work in Sub-Saharan Africa by using...

GhNewsBanQ - February 7, 2023 0
Amalitech is looking for a passionate Senior iOS Developer who can create an infrastructure for iOS app development and lead the whole process. They...

GhNewsBanQ - February 7, 2023 0
There is a Digital Training & National Service Opportunity at Amalitech. Applicants will be required to complete a coding assessment to understand their existing...

GhNewsBanQ - February 7, 2023 0
AmaliTech is looking for an experienced Senior Front-end Developer with deep expertise in Angular who is a team player to build front-end solutions for international...

Ghnewsbanq is a reliable source of up-to-date information. Our news come in the form of Entertainment, Sports, General News and Tutorials.
Contact us: Owusubismarck.20@gmail.com
© 2022 All Rights Reserved